Books I Cannot Review: The Miseducation of Cameron Post by emily danforth & Aristotle and Dante Discover the Secrets of the Universe by Benjamin Alire Saenz 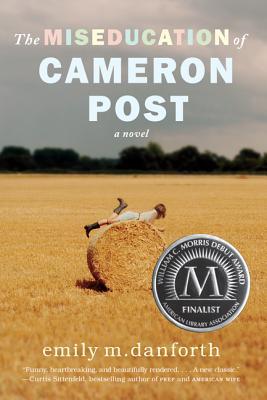 I rarely come across books that I cannot review; that leave me speechless, both in mind and body. Kristin Cashore's Fire is a novel I've re-read numerous times, but I can never - never - convey the depth of emotion that novel inspires in me, despite the fact that I can quote from it. Within the past month, however, I've been lucky enough to read two remarkable LGBT novels for teens, both of which have left me spell-bound and speechless. And, truly, I have tried, time and time again, to write reviews for these novels. I want to write reviews for these books because they deserve reviews and they deserve to be read and mulled over and cherished on a shelf. Yet, the words fail me. In a desperate attempt, I have tried to string together a few phrases, a couple of sentences, in an effort to spread my love for these two novels. Even if these non-reviews don't convince you, I certainly hope that someone, someday, will thrust these into your hands and make you read them. It's worth it.

The Miseducation of Cameron Post by emily danforth is a novel I've been meaning to read for a long time - a very long time. It went onto my TBR even before it was released because of the acclaim it received and, even after winning an award, it went unread on my Kindle. I don't know why. It is a quiet, moving, and utterly fierce novel. It’s the type of story that creeps up on you; the prose keeps you flipping the pages, but it isn’t until much later that the full emotional impact finally hits. At somewhere around the 80% mark, tears leaked from my eyes; slowly, and then all at once, pouring out at speeds I couldn’t even have imagined. You see, this is a story of one girl's struggle to reconcile her sexuality and, although the narration can drag and even become dull at parts, it is incredibly moving all the same. Cameron's life, full of a multitude of sexual encounters, define her, slowly but surely, and the themes of feminism - of encouraging women to be proud of their sexuality and unafraid to stand up for it - is astounding.

Nevertheless, this novel truly gutted me in its historical depiction. danforth's debut is set in the late 1900s and, as such, the LGBT movement isn't as prevalent as it is today. In Cameron's small town, a religious and conservative area, her identity as a lesbian is looked at as a sin. As such, she is sent to a religious camp over the summer in an effort to "cure" her. It doesn't really hit you, until you meet the teens at this camp, the type of behavior they've had to put up with all their lives. Everyone, from their parents to their teachers, are telling these teens that they are wrong, that they are bad, that they are horrible for loving someone who isn't of the opposite sex and the manner in which this is conveyed - the events that occur at this camp - just destroyed me. I've never considered the LGBT community in this manner before and, truly, danforth's debut is not only inspiring and feminist, but eye-opening as well. It isn't merely the journey of a girl, it is the journey and struggle of people everywhere, homosexual or heterosexual. It demands to be read. Much like The Book Thief, this is one book you're better off just experiencing - words do it no justice. 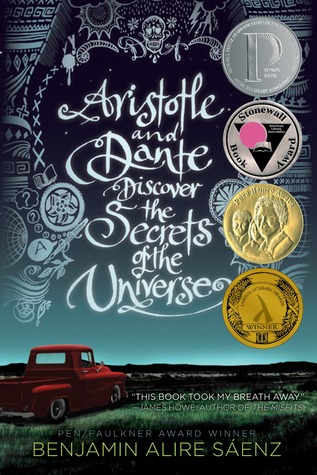 While The Miseducation of Cameron Post can come off as an overly sexual novel, with Cameron experiencing many sexual encounters over the course of her life, Aristotle and Dante Discover the Secrets of the Universe is far more subtle in its exploration of homosexuality. It, too, is a quiet novel, slow to begin and often meandering, but beautiful. Saenz's writing is lush and gorgeous, capturing the complexity of adolescence and depicting an immigrant household in a realistic manner. Ari and Dante both experience inner dilemmas in reconciling their Mexican backgrounds with their American lifestyle and, moreover, with the stereotypes and stigmas they face in the world at large. Saenz is one of the few - actually, the only - author to truly understand this universal issue that all immigrant children undergo. As a first-generation Indian raised in America, I can testify to this fact myself. It isn't easy to fully embrace your heritage, but it doesn't feel right to disregard it either. At the same time, how much of your culture lies in stereotypes and how much of it lies in its true roots? It's a difficult situation to comprehend and convey, but Saenz really fleshes it out thoroughly between these two friends, so different and yet so alike.

Aristotle and Dante Discover the Secrets of the Universe revolves around the friendship of these two boys, Ari and Dante. While Ari, the narrator, comes from a household where his older brother is in jail - and is never discussed - and his father is a veteran of war - another issue not discussed - Dante hails from an intellectual environment, an only child with parents who have made it beyond the stereotypical minimum-wage jobs their race is associated with. Although both boys are incredibly different, their growing friendship is complex and deep, certainly one to root for throughout the narrative. Moreover, I love the tidbits of truth and contemplation that lie within each chapter. Saenz's writing looks into your soul. While they may script Ari's thoughts, they reflect universal emotions in such a subtle manner, connecting the reader instantly with the novel.

Additionally, the relationships that Ari and Dante sustain with their parents are also just as important as the relationship they sustain with each other. I feel as if I've been repeating myself, though. Aristotle and Dante Discover the Secrets of the Universe is about many things - it is about growing up, about accepting yourself, about maintaining friendships, about facing the past, about living with disappointment and anger, but mostly about the complexity of the relationships we sustain throughout our lives. It truly is a beautiful little book, worthy of its awards and transcending all barriers - age, sexuality, gender. Just read it. I promise, you won't regret it.
Posted by Keertana at 12:00 AM