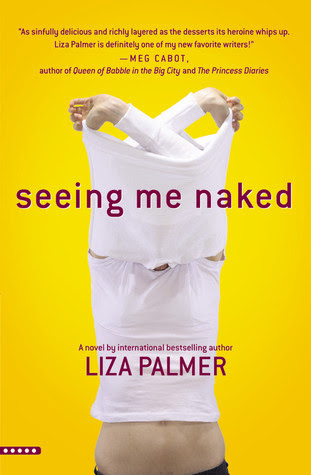 I was quite pleasantly surprised by how different this novel is from Palmer's latest, Nowhere But Home. And yet, both novels are written beautifully, gripping and energetic in their depth. I love the voice of these narrators, so honest and raw, yet flawed too. Usually, once I've read at least two books by the same author, I can sense a pattern of sorts. With Liza Palmer, her writer's voice is present and very much there, but subtle. What truly shines, instead, with her works is her talent for capturing the hearts of many different types of protagonists and thoroughly ensuring that her readers are enmeshed in their struggles. Seeing Me Naked, much like my first Palmer novel, only managed to both impress me and delight me - a feat which is rare, but all the more rewarding just the same.

Elizabeth has always lived under the shadow of her father, the famous novelist Ben Page. In fact, her entire family has. Whether it be her older brother, Rascal, who also made it big in the writing industry, or simply herself, a pastry chef, none of the siblings have been good enough for Ben Page or quite been able to live up to his expectations. Nevertheless, despite the broken family that plagues her, Elizabeth is happy and content with her role as a chef in a famous restaurant in L.A. Until, that is, she is offered a new job, one she knows her father will be disappointed by. Until, that is, she meets Daniel, a basketball coach who forces her to re-evaluate everything she thought she knew about love. And, really, life itself.

Seeing Me Naked is such a beloved novel merely because it follows a woman who, for all intents and purposes, seems content with her life. Elizabeth is wealthy, she has a stable job, and she has a boyfriend who she sees rarely, but still one who understands her, loves her, and is always willing for some great sex when he's not traveling on work. Thus, to see Elizabeth wake up to the reality that is her broken family, her terrible boyfriend, and a job that really isn't fulfilling her as much as she thought is both a unexpected and needed surprise. From the beginning itself, though, Elizabeth is a heroine we cannot help but feel for and sympathize with. After all, there isn't anything much like a family dinner gone bad, a father flirting with her son's latest blonde toy, and an inevitable sense of loss to kick start a novel. Seeing Me Naked isn't, though, a story of depressed and broken families. Palmer strikes a perfect balance between the serious issues Elizabeth faces with her home life and the heady rush of romance she shares with Daniel.

And Daniel. I am a sucker for the sweet guys, not the alpha males, so Daniel immediately won my heart. After winning a set of free cooking lessons from Elizabeth, Daniel's shy demeanor in the kitchen wins our heroine over too. What I love about their romance is that it isn't filled with drama, but it isn't easy either. It isn't the main focus of the novel at all, but Daniel provides Elizabeth with a stability she never had in her last relationship and, furthermore, her shows her that the love she's used to seeing at home isn't the type of love she should settle for. Palmer's novels are all about character and all about growth, so the journey Elizabeth undertakes in pursuing her dreams and goals is one you can't help but root for. Additionally, the tender family moments in this, especially Elizabeth's strong bond with her older brother, made me love the book all the more. Palmer manages to capture family relationships in all their messy strength and flaws, a talent which few authors share, but which this author has in spades. Although I haven't been too interested by the synopses of Palmer's other novels, I don't doubt that I will be reading more - much more - of her in the future. Here is an author whose books are comfort, words are chocolate, and stories take on a life of their own. I don't need anything more.
Posted by Keertana at 12:00 PM