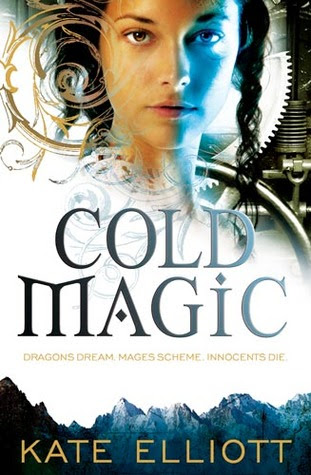 It would be a lie to say that very few things really get me excited – because I fangirl a lot - but the words “fantasy” and “steampunk” mixed together with other historic words like “Rome” really, really get me excited. I mean, Cold Magic might as well have been written solely for me with an enticing summary like that. And, honestly, the story within these pages does not disappoint. Not only is my first venture into the works of Kate Elliott a strong one, but it is one that has hooked me completely. You can trust that I will soon be devouring much more than just this trilogy by Elliott - much more.

Cold Magic takes place in a re-imagined world, one where ice reigns supreme and cold mages are now in power, their only threat the mysterious spirit world and its hunters. Cat, the protagonist of our tale, is a curious and lively young girl, nearly twenty, whose friendship with her cousin Bee is more of a sisterhood than anything else. The Barahal family has taken Cat in after her parents drowned when she was young and ever since she could remember, she’s never felt like an outsider in her aunt and uncle’s home. Thus, when a cold mage, Andevai, storms in to marry the eldest Barahal daughter, Cat willingly binds her life to his. As she will soon learn, though, nothing is as it originally seems, least of all her bloodlines.

Although Cold Magic starts out relatively slowly, and it even often bogged down by lengthy descriptions and seemingly unnecessary conversation, it is a fast-paced and well-crafted read. As a heroine, Cat shines; flawed in her stubbornness and sharp tongue she may be, but she’s also intensely resourceful and shockingly relate-able, unafraid to appear vulnerable though she is a strong woman. I wasn’t a huge fan of the fact that much of the plot of this story focuses on Cat escaping Andevai, who is sent to kill her, but I was pleasantly surprised that this allowed for so much more depth to be added to the story. For one, I love the world Elliott has built and her world-building is impeccable. I hardly thought it dragged the story down, though I know many readers did, and I loved all the glimpses into multiple perspectives we were given.

Furthermore, Andevai is not a creature to be missed. Goodness, does this cold mage have my heart or what? Although he appears vain, snobbish, and aloof at first glance, throughout the story we slowly come to see that there is far more to him. I loved the slow and steady manner that Cat’s reactions towards him changed and though I ache for more interactions between these two, Cold Magic offers plenty of charged air and promising chemistry. In addition to Andevai, though, Bee had to be my next favorite secondary character. I love that Bee and Cat stick up for each other like sisters, despite the struggles that come their way. I find that literature in general has a dearth of realistically portrayed friendships, but this one remained the focus of the novel and a strong center point of the series, which I appreciated.

All in all, Cold Magic is a delight for fantasy lovers. While it contains only a few steampunk elements, the politics, intrigue, and lore that Elliott has built is more than satisfying. Furthermore, with such engaging and three-dimensional characters set up, this trilogy will undoubtedly only get better from here on out. Andevai Cold Fire, here I come!