The Chocolate Touch is the fourth book in the Amour et Chocolat Series, a romance series made up of companion novels that feature romances in Paris with plenty of chocolate and desserts. You don't need to read the previous books to read this one and this review is spoiler-free for the previous books. You can read my reviews of the previous novels in this series HERE. 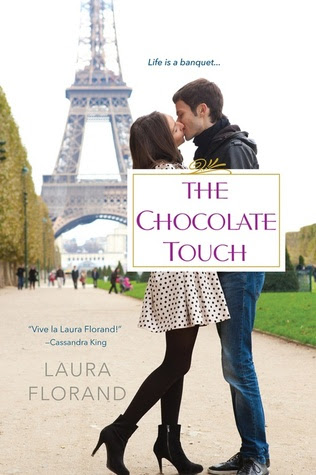 Ever since The Chocolate Thief, I've been a die-hard fan of Florand. Although none of the books in this series have come as close to my heart as her first one, her works are gems. Not only are they swoon-worthy and engaging, impossible to put down once begun, but they are written with a sensual and gripping style that draws you into the lives of the characters. Florand seamlessly manages to add depth to mere chick-lit, allowing her books to transcend from simple pleasure to true enrichment. With The Chocolate Touch, Florand finally managed to re-ignite the flame she lit with The Chocolate Thief. Although her second and third books were delightful reads, somehow their large male leads never appealed to me, which isn't to say I didn't still swoon, but simply not as much as when I heard the name Sylvain Marquis. Now, with her latest, The Chocolate Touch, Florand returns to the love story of another chocolatier (let's just be honest - I go for the chocolate guys more than the macaroon or pastry chefs!), Dominique Richard. Fans of Florand's prior books already know him as the womanizer who is Sylvain's biggest opposition, but unraveling his hidden layers - a dark and violent past - is something to truly look forward to.
The Chocolate Touch really shines, though, not with its sexy hero, but with its heroine, Jaime Corey, the younger sister to Cade. Jaime is a broken and lost woman, only recently discharged from the hospital after a horrible incident. As such, her body is weak, her family is overly concerned, and she begins to doubt herself. As such, out of all of Florand's protagonists, Jaime probably lends herself most easily to depth. Although she is in Paris to recuperate and regain her strength, her mind has now grown weaker than her body, confused and a mere shell of the confident and sure woman she once used to be. Jaime and Dominique clash in a tidal wave of sexual passion when they meet, but as they spend more time with one another, they grow to unravel the dark layers and multiple secrets that each of them hides.
Florand takes her time to build the relationship between Jaime and Dominique, allowing them to slowly stumble upon hurdles and reveal their secrets at a steady pace. Of all her romances, this is perhaps the most heart-breaking. With The Chocolate Thief, Cade and Sylvain went through their own individual growth and revelations. With The Chocolate Kiss, Philippe and Magalie overcame their pasts. Now, in The Chocolate Touch, Dominique and Jaime have to learn to trust again, live again, and hope again. It's a much more difficult journey, but it never seems that way because the balance between romance and depth is intricately struck. Furthermore, the metaphors that I seem to tire of quickly are kept to a minimum, which is a refreshing change from the overdose of castles and princesses we were bombarded with in The Chocolate Kiss. If anything, the romance in this installment revolves around the basest feelings and emotions: comfort, security, tenderness. Jaime and Dominique are lucky enough, despite their dark pasts, to find this in one another and it is those emotions that makes them hold on and stay. In many ways, these two are very similar - chasers of danger, unafraid of their own safety, and extremely insecure. Yet, although both Jaime and Dominique view themselves as powerless beings, they lend strength to each other which makes their bond all the more tight and all the more meaningful too.
In fact, this latest Florand romance was well on its way to becoming my favorite, but the last three-four chapters seemed to drag unnecessarily. It seemed as if the conversations were traveling in circles and, really, the conflicts were solved, so the petty arguments and prolonging of the story were a little grating. With the exception of that, though, this book was a gem. From the beginning to the end, Jaime and Dominique's tender romance made my heart flutter, break, cry, and re-build, all in a short span of just hours. I'm so very glad this series isn't about to end anytime soon as each consecutive book is just better and better. With Paris as a backdrop, chocolate as a given, and Florand's writing, it's safe to say I'm hooked. And don't regret it one bit.
Posted by Keertana at 8:00 PM