Review: You Don't Have to Say You Love Me by Sarra Manning 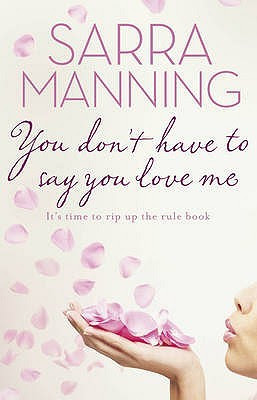 Title: You Don't Have to Say You Love Me

You Don't Have to Say You Love Me is the type of novel whose story you can predict from the synopsis itself. You know, even before you crack open the spine, that it's going to be a typical romantic comedy, a chick-flick, just like the thousands you've already seen, but you're willing to give it a try anyway. Or, at least, I was. Granted, I picked it up primarily because I wanted a taste of Sarra Manning's writing for adults after enjoying her YA Novel, Adorkable, so much last year, but like with Adorkable, Manning's adult romance surprised me with its unexpected depth and poignancy.

With You Don't Have to Say You Love Me, Manning creates a very Bridget Jones-esque protagonist. Neve is an intelligent young woman who works in an archive in London, but she's also a highly insecure one. Ever since she was in high school, Neve has been mercilessly teased about her weight. As such, she's always believed she was fat and has taken great pains over the past three years to lose weight. Even with her weight loss, though, she isn't happy. For Neve, happiness is a size ten dress and impressing her intellectual soul mate, William, who is in LA. William, who is returning in just a few months, is who Neve believes to be her Mr. Right. Not only is Neve preparing herself physically for William, but as a 25-year-old inexperienced with sex, she desperately wants to be prepared for a relationship as well. Thus, after a string of unsuccessful blind dates, she winds up fake dating Max, her sister's boss and a resident man whore.

As you can expect from the synopsis, Max and Neve fall in love, some drama ensues because they both have problems, and really, I am quite, quite sure you can guess what happens when William returns to London during the last couple of chapters of this novel as well. Yet, You Don't Have to Say You Love Me is a fantastic novel, despite its predictable plot. What makes it such a page-turner (really, I could not put this down!), is that its protagonist, Neve, is so very endearing. From the first page itself, her voice is genuine, authentic, and easy to connect to. Although her constant cribbing about her weight can be a little irritating after awhile, it's obvious that her insecurities are real and not simply a statement to garner attention.

While I loved the manner in which Manning explored Neve's insecurities about her weight, using it as an issue that affected every part of her life and truly developing her thoughts about herself as her relationship with Max progressed, I did also have a few bones to pick with it. In some ways, Neve is a convenient heroine. As women, we all feel self-conscious at times, especially with the marketing industry the way it is and with Victoria's Secret models strutting around on TV and in magazines. Yet, for Neve, her obesity was genuine: a woman who used to be a little over three hundred pounds dropped to under half her weight. Thus, her insecurities were all based upon her bullying and the very real past since Neve was a big woman. On one hand, I appreciated that Manning took Neve as she was now, at just a hundred and fifty pounds, and made her still as insecure as she ever was; she took a woman who was curvy and made her see herself as perpetually fat, which is the reality for a lot of women. At the same time, however, I wish she had chosen to explore this image crisis for other women too. We get glimpses of Celia, Neve's sister, upset that she's very stick-like or even other women complaining about her bodies, but this book was so utterly focused on Neve and women just like her that it felt a bit too exclusive for my liking.

In addition to that, Neve's happiness with herself and who she was is directly linked to Max. Max and Neve's relationship progresses in a very realistic manner, with them both setting boundaries on their fake relationship and not truly trusting each other with their personal issues until much later. With such a large novel, Manning is able to really make this work over the course of a few months. Yet, we also see that when Neve is finally happy with Max, she ceases to care about her weight. While this is a great thing, I almost felt as if it gave the wrong message across. You don't need a man to have sex with you to feel good about your body image. You just don't. You can be single and STILL be perpetually happy and not dieting or constantly weighing yourself. I wish that at the end, this message was a little more clearer. It felt like the moment Max was out of the picture, it was just back to more and more diets.

Again, this is because Neve was bullied so badly for years - and that her bully happens to be her sister-in-law who lives downstairs and STILL bullies her - but, then again, isn't this just the exclusivity I was discussing before?

Nevertheless, despite my qualms with this novel, I really cannot stress enough that I thoroughly enjoyed reading it. Although it is a hefty book, it never felt too long or drawn out and while I frantically flipped the pages of this novel, I wasn't really worrying all that much about the issues I mentioned above. Instead, I was enjoying the hilarity and authenticity of Neve's narration and her blundering, romantic, and utterly sweet relationship with Max. Max has his fair share of problems, as does Neve, and the fact that he makes Neve eat properly and cares for more than just her appearance is so wonderfully brought across. While Neve's self-image is linked to the fact that she has a boyfriend, it is also evident that Neve has come a long way from the person she was in the beginning of the novel and still does, potentially, have a long way to go. Sarra Manning has written a novel that is compulsively readable, relate-able, and will keep you reading and laughing until the wee hours of the morning. Although this book tackles some very real and serious issues, it was such a cute contemporary that I genuinely loved it. In fact, I am honestly torn about rounding this up to 4 Stars because my lower rating doesn't truly reflect how much I enjoyed the novel. Whether it be in adult romance or young adult contemporary, Manning is an author I can count on for a delightful and romantic reading experience. Guaranteed.
Posted by Keertana at 12:00 AM