Cover Reveal and Excerpt of Perception by Lee Strauss!

I am so excited to be participating in the cover feature of Lee Strauss' latest novel, Perception, the first book in a new Young Adult Science Fiction Series! So, without further ado, behold the gorgeous cover and scintillating synopsis of this new novel! :) 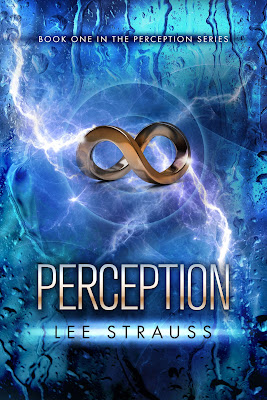 
Seventeen year old Zoe Vanderveen is a GAP—a genetically altered person. She lives in the security of a walled city on prime water-front property along side other equally beautiful people with extended life spans. Her brother Liam is missing. Noah Brody is a natural who lives on the outside. He leads protests against the GAPs and detests the widening chasm they’ve created between those who have and those who don’t. He doesn’t like girls like Zoe and he has good reason not to like her specifically. Zoe’s carefree life takes a traumatic turn.  She’s in trouble and it turns out that Noah, the last guy on earth she should trust, is the only one who can help her.  Perception is a Science Fiction, Mystery, and Romance Young Adult Novel that takes place in the not-too-distant future in a world changed by climate extremes, natural disasters and impending wars, and where scientific breakthroughs cause class divisions - both financially and philosophically. It explores the clash between faith and science and how differences can separate us as enemies or alliance us together. And in some cases, even in the midst of betrayal and personal crisis, there’s room to fall in love. Perception is the first book in a planned three book series.

Wow! If that cover didn't already catch your eye, then the synopsis surely must have! I love science fiction and while the idea of a genetically altered person isn't anything new, I find that Strauss' political and philosophical take on it through class divisions definitely is. Plus, I love the type of romance that starts out as hatred and progresses into something much deeper. Perception is a novel that I can't wait to see on shelves - especially with that eye-popping cover - and that I am looking forward to reading myself. Want a taste of this novel for yourself? I was lucky enough to receive an excerpt of Chapter 1 of this remarkable story and am allowed to share it with you all, so enjoy! :)


Chapter 1
I balanced on my surfboard, right thigh burning and salt water stinging my eyes, while the best wave of the early morning carried me like a goddess on a pedestal to shore. My older brother Liam and I shared a friendly competition, and it gave me a certain, blissful satisfaction to catch the same wave and to get to shore first.
“Beat ya!” I shouted over the noise of the crashing surf.
Seagulls flocked and circled over us, squawking loudly, adding to the cacophony.
The sun glistened off Liam’s damp blond curls as he shook them out. His eyes sparkled as his lips tugged up into a grin. “I let you win.”
“Did not!” I smacked him playfully on the arm. “One more ride?”
Liam unzipped his wetsuit letting the top half fall down past his waist. He was in fine form, and I understood why all the girls raved about him. He was responsible for a long list of broken hearts.

“I gotta get going,” he said, lifting his board.
I fell into stride beside him, my feet sinking into the cold, wet sand. “So soon?”
He nodded, the glint leaving his eyes. My lips tightened into a frown “You’re taking off with again?”

What do you think? I'm quite intrigued by this story already and think the class differences between Noah and Zoe make for an interesting relationship. Plus, aren't you just dying to know about what Liam is working on and where he went?

If you're interested in this novel, be sure to add it on GoodReads here and check out Lee Strauss' Website, Facebook Page, and GoodReads for more information about her upcoming novel!
Posted by Keertana at 2:00 AM