1. Hogwarts - The Harry Potter Series by J.K. Rowling
In all honesty, this should probably read "Wizarding World of Harry Potter" because every setting mentioned within these books is phenomenally vivid - the Ministry of Magic, Hogsmeade, Grimmauld Place, Azkaban, Diagon Alley, Malfoy Manor - you name it! It's hard for me to imagine a list without Hogwarts on it though because, as Harry always says, "Hogwarts is my home." I feel so comfortable amongst its moving staircases, hidden rooms, and tall towers, that it really is one of my favorite book settings of all times.
2. Middle Earth - The Lord of the Rings by J. R. R. Tolkien 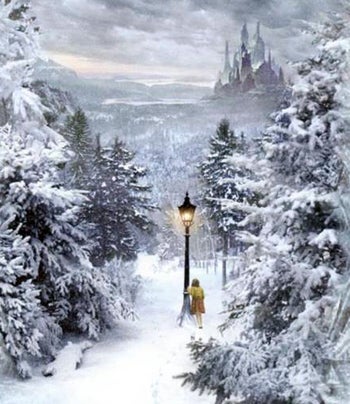 C'mon, who doesn't think of Middle Earth when the word "vivid" comes to play? Tolkien's world is nothing if not atmospheric and the entire realm, whether it be the dingy Mines of Moria or the beautiful forests of elves, is beautifully written and depicted.
3. Narnia - The Chronicles of Narnia by C.S. Lewis
The World Within the Cupboard. After Hogwarts, Narnia was one of the first magical lands I became familiar with and I loved getting to know it changed from book to book - how the land was as much a character as the protagonists themselves and how it not only shifted and changed with time, but how it was eternal and ever-lasting as well. C.S. Lewis is one of those rare authors who manages to pack so much more into a children's novel than other people can, and I love his writing and world dearly. 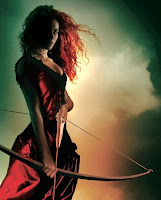 4. The Dells - Fire by Kristen Cashore
I love Kristin Cashore's writing and her world-building is no different. While I love the Seven Kingdoms in Graceling, I love the beauty and atmosphere of the Dells even more, especially as we see their beauty through the eyes of Fire. Not only is the land with its vibrant colors appealing, so are the multi-colored animals that grace its lands. Beautiful.
5. Dublin, Ireland - Fever Series by Karen Marie Moning
Karen Marie Moning is a fantastic author and her ability to create a realm of fey in the heart of Dublin is phenomenal. Although I have never been to Ireland, I can imagine her settings with clarity and love the depth of world-building that can be found in her novels.
6. Melbourne, Australia - Graffiti Moon by Cath Crowley
Australia is another place I have never been to but feel as if I have been. Graffiti Moon really seemed to transport me on a midnight whirlwind adventure on the streets of Melbourne and I loved every minute of it! Cath Crowley is another one of my favorite authors and her writing sucks you in and makes you never want to leave, much like Australia itself I'm sure! ;)

7. SOAP - Anna and the French Kiss by Stephanie Perkins
Admit it - you want to live in Paris. Or at least go to school there. Or at least meet someone as swoon-worthy as Etienne St. Clair in your life - I know I do! ;) The setting of Anna and the French Kiss is not only deliciously foreign and filled with baguettes, pastries, and other mouth-watering delights, but it is beautiful and truly transports you into the heart and culture of France. I love it!

8. Icemark - Cry of the Icemark by Stuart Hill
Icemark is one of those unfortunately unknown settings, but one I love for its harsh climate, formidable woman warriors, deadly vampires, ghostly tree spirits, giant talking snow leopards, and loyal wolf-men, not to mention the occasional warlock or two! ;) It's a beautiful land that you grow to love and defend as a reader and I wish more people knew about and appreciated this epic tale.
9. Jellicoe Road - Jellicoe Road by Melina Marchetta
Jellicoe Road, despite being an imaginary lane, is one that I know so vividly and personally. Marchetta's writing is beautiful and her tale of this road and its story over three generations, how it grows and changes gradually, is heart-wrenching. It is impossible not to feel akin with this atmospheric setting and love it with all your heart.

10. Guatemala and Central America - Wanderlove by Kristen Hubbard
Wanderlove is one of my favorite books, mostly because of its characters and romance, but partly because of its multiple destinations. I have never traveled to Central America, but Hubbard writes so descriptively that I feel as if I have. Furthermore, despite the fact that our protagonist changes cities constantly, Hubbard never makes us feel the loss of setting which I love.
Posted by Keertana at 6:00 AM